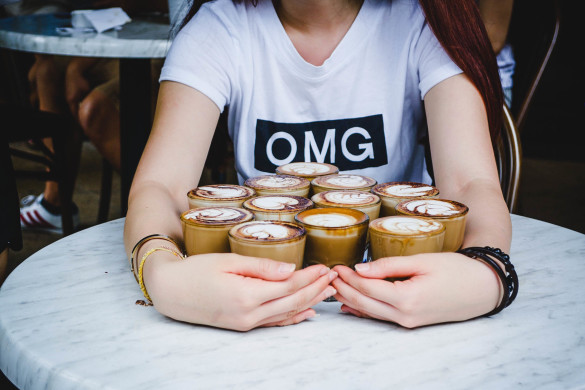 Do you wake up feeling like you need your daily fix? More than 90% of American adults drink caffeine regularly, consuming around 200 mg of caffeine every day. That’s the same as drinking two cups of coffee.

Caffeine is an alkaloid, found in coffee and different types of tea. It is a stimulant that affects our central nervous system and can increase concentration, metabolism, and boost ones mood.

Drinking caffeine is a safe and non-harmful habit, but if someone becomes unable to get through their day without caffeine, it could be an indication of a form of addiction.

However, unlike other stimulating substances (narcotics such as cocaine), caffeine does not cause any damage to the areas of the brain that are responsible for reward and motivation.

It should be noted that because of those, the American Psychiatric Association (APA) has not identified caffeine addiction as substance abuse. Yet the APA does recognize caffeine withdrawals as a clinical condition.

How Much Caffeine Can I Drink Per Day?

According to Mayoclinic, consuming up to 400mg of caffeine per day is considered relatively safe for adults and shouldn’t pose any risk to your health or be the cause for addiction and withdrawals. That’s around four cups of coffee per day. However, addiction does not necessarily mean the amount consumed, but rather the need to consume.

The APA has recognized caffeine withdrawal as a clinical condition once significant symptoms occur when quitting caffeine cold-turkey. The symptoms of withdrawals only last around a week, and may occur from the first day of quitting.

How Can I Cut Down My Caffeine Consumption?

Pay attention to how many caffeinated beverages you’re consuming.

Don’t cold-turkey yourself. Rather cut back one drink at a time until you’re back at safer levels.

If you can’t go without that delicious dark roast, try decaf for a while. Replace however many cups of coffee you need to with decaf until you’re back at safer levels.

While caffeine dependency is not classified as substance abuse by the American Psychiatric Association, it can become a negative habit if done too frequently or if there is too much importance on getting your daily fix. The withdrawal effects of caffeine addiction are terrible, so make sure to monitor yourself before you get to that level of consumption. If you are already drinking more than 400 mg per day, consider cutting down your intake of caffeine.